Within the SEO industry, there are various different opinions on how to properly utilise headings for optimal SEO results. According to an informal Twitter poll by user @CyrusShepard, there is almost a 50/50 split on whether Google recommends using a single H1 heading in your SEO content or whether you are free to use as many as you want. 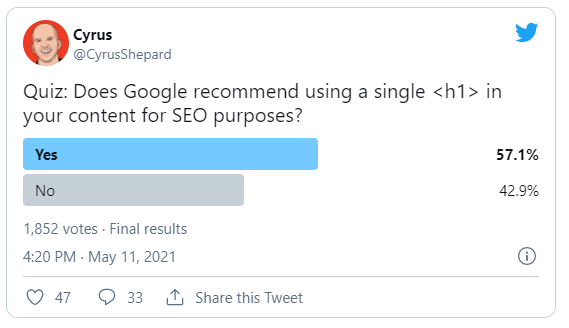 The poll indicates that 57.1% of the 1,852 Twitter users that partook in the poll believe that a single H1 heading is all that is to be used in their SEO articles. So is this true? Or do the minority actually have the upper hand in this case?

Contents hide
How many H1 headings does Google recommend?
Should you give up on H1?
Related posts:

How many H1 headings does Google recommend?

According to Google’s John Mueller, contrary to popular belief, it does not matter how many H1 heading tags you use. He says: “You can use H1 tags as often as you want on a page. There’s no limit, neither upper or lower bound.” This may come as a surprise to many SEO professionals, as the poll indicates. Mueller also reiterates that “your site is going to rank perfectly fine with no H1 tags or with five H1 tags.” So there you have it, it is truly up to you how many headings you want to use in your SEO content pieces, with the use of them not necessarily having a direct impact on your SEO ranking. To further communicate this point to SEO professionals, Google have released a video clarifying that H1 headings do not necessarily have a limit. In the video, John Mueller says: “Our systems don’t have a problem when it comes to multiple H1 headings on a page. That’s a fairly common pattern on the web.” This means that Google is well equipped to rank your page appropriately whether or not you use H1 headings and regardless of the format that you use to layout your web pages.

Should you give up on H1?

Although they may not be as essential as many people seem to believe, it doesn’t mean you need to ditch H1 headings altogether. John Mueller has indicated that he still believes they should be used, even if they aren’t as strictly beneficial to your ranking as once thought. H1 headings are highly useful for communicating the structure of a page to both users and search engines and will increase the usability of your page. They allow people to navigate to relevant information quickly and provide a clear outline of what you are discussing in your article. Because of this, they are still useful to use. The main takeaway from all this information is simply that you can now use them as frequently or as little as you like without fear of affecting the effectiveness of your SEO strategy.

How long does it actually take to get ranked with SEO?
Google’s new ‘about this result’ feature could change the way we search
Top 10 common SEO mistakes and how to fix them
Best Ways To Analyse Your Website’s Data